The First Photograph – A brief History

The summer of 1826 was a turning point in recorded human history. After ten years of failed experimentation a man by the name of Joseph Nicephore Niépce created the first permanent surviving photograph. The first surviving photograph depicted was the view from Niépce’s workshop at his estate in Gras, France. Though hard to decipher it contains several buildings a tree and a barn. Although poor in quality compared to even the earliest photographs its development was the foundation of what we know of as photography today. 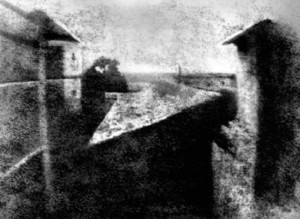 Nicephore Niépce was born on March 7th 1765 to a wealthy family suspected of having royalist sympathies. His mother was the daughter of a well renown lawyer and his father the kings councilor. In his youth Niépce showed an incredible aptitude for the invention process but was preparing for a career in the church. Before the start of the French Revolution He left the church to become an officer in the army. Due to his royalist sympathies and his families past he left the military during the first period of the revolution. When Napoleon came to power He returned to the army. After serving in the Sardinian and Italian military campaigns. Shortly thereafter he retired from the army for health related reasons. After a few years of being a statesmen he returned home and dedicated his time to scientific experimentation and invention.

It was this aspect of Niépce’s life that would forever change the way humanity saw the world and our history. In 1822 he created the first permanent image using a camera obscura, but it was in 1826 when he created the image that exists even today. To do this he used bitumen cutback attenuated in animal oil. He deposited this solution onto a plate made of glass, copper and tin-lead alloy and exposed it for several hours. As odd as it sounds the first equivalent photo paper was actually asphalt. Once the image on the plate became visible Niépce used an acid to process the picture. This acid dissolved the coating and left the exposed lines to show through. Once this process was completed an engraver used the exposed lines to chisel out the plate used for copying the image. With that heliography “of the Sun” was invented. This first image took 8 hours to expose and due to the movement of sun the building in the photograph had light coming from both directions. Though photographically speaking this first image is of poor quality it was the advent of modern photography.

The ability to transfer an image using light was the gift that was given to us. In the almost 200 years since that first photo was taken photography has become a mainstay in our everyday lives. Every newspaper you read, every family photograph you cherish, every piece of modern history transferred using nothing but light was founded on the inventive nature of humanity. Niépce is the embodiment of that creativity and though not well known to the masses he has affected our lives in ways that we should be eternally grateful for.