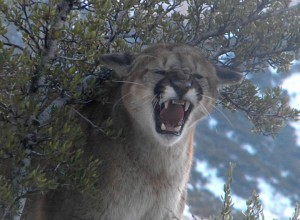 Sometimes, even a mountain lion has to watch who it bites.

Consider the case of the mountain lion, or cougar, who jumped out of the woods at a park in British Columbia and took a 4 ½ year old boy named Paul Krismer, Jr., by the head.

The boy’s father, Paul Krismer, happened, luckily enough, to be nearby and turned just in time to see the cat do what comes naturally.

“I heard this cracking in the bushes,” Paul Senior recalled, “and I looked back and I could see this cougar leaping at Paul and just getting his jaws set on Paul’s head. Then they fell to the ground together.”

The distraught father, who was about 20 yards away, rushed to the scene of the attack, without any weapon in hand and, instead, used his feet. He jumped on top of the cat with both of them.

“I just leaped off a log which was at a height over the two of them,” he stated, “and came down very forcefully on the cougar’s chest with both feet.”

The mountain lion was so befuddled by the brazen attack of the father that it released the youthful Paul from its generally vicious grip and fled back into the wild, where, no doubt, it was accustomed to meeting less formidable adversaries than Paul Junior’s dad.

What did the boy recall of the life-threatening crisis?

“He thinks it’s a bad cat that made a bad choice,” his dad said. “I honestly don’t think he has a whole lot of sense about his own mortality.” The dad went on to say his son is living the life of a typical 4-year-old. “You wipe out on your bike one day and a cougar attacks you the next. Then you fall off the swings the day after that. It’s just another thing that happens.”