Family Guy: Laughing At The Lighter Side Of Life

There have been very few shows which have been able to hold their own like Family Guy against a wave of controversies that has been hurled towards them ever since the show’s inception.

An animated take on the modern American family of today, the lead character of the show features Peter Griffin- a fat, lazy, unintuitive husband with an average job who goes more by the heart than his head. Presented in stark contrast is his 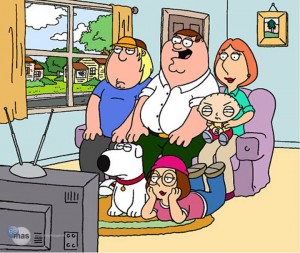 wife Lois- the attractive, logically thinking wife representing the fantasy of all American males. They have two kids Chris and Meg who different two shades of teenage cravings and the talking dog Brian is the source of illuminating wisdom in the house full of madcap mishaps.

However, the star laurels of Family Guy rest on one and one person alone. Stewie Griffin plays an one year old homoerotic baby who dreams of world domination and plans to kill his mother. His dialogues are laced with layered intelligence and sarcastic humor at its pinnacle making him come in direct comparison to other legendary animated kids like Bart and Lisa from the Simpsons and Eric Cartman from the equally controversial South Park.

What sets the show apart is its approach to modern day life that dabbles in between scathing social commentary and unrelated pop culture gags culminating in a laugh riot parodying modern sensibilities. It night lack character depth like the Simpsons or the intellectual wit of South Park, but has a loyal fan following of its own making it the only TV show to come back after being cancelled by FOX.

Seth MacFarlane, the creator of the show has often come under a line of fire for a number of issues. Peter Griffin has been labeled as a Homer Simpson clone by most Simpson loyalists while several have complained about the irrelevant nature of cut away pop culture shots without any context to the plot.

The biggest issue however lies in the Family Guy vs. Sarah Palin debate that takes the effect of such shows on modern society on a much deeper context. Sarah Palin, the former Governor of Alaska and 2008 vice presidential candidate took on the writers of Family Guy by calling them “heartless jerks” for their portrayal of a girl with Down Syndrome in one of the episodes.

The controversial episode shows Chris wooing a girl called Ellen with the syndrome who replies during a dinner date that her father is an accountant and her mother is the former governor of Alaska, a subtle jab towards Palin herself whose youngest son Trig has Downs Syndrome.

The Family Guy vs. Sarah Palin controversy sparked a huge debate on the portrayal of disability on television and the limit of the “offend everyone” principles such shows are aimed at. Seth MacFarlane commented saying he was proud of the character Ellen who was headstrong and dynamic despite the Syndrome and Andrea Fay Friedman, the women with Down syndrome who voiced the character said she did not find it an insult to have the disease unlike Palin who carried Trig around for sympathy and votes.

Palin and her daughter Bristol launched a verbal tirade against the show making it one of the biggest television controversies in the history of Family Guy and American sitcoms.